The Harder They Fall

The Harder They Fall centers on lengthy interviews with celebrities who have hit rock bottom as a result of their addiction and risen to achieve success while in recovery. Most, but not all, of the celebrities in the book reached peak stardom during the drug-induced sixties and seventies and are currently living lives of extraordinary accomplishment despite their battles with addiction. Unlike many celebrities of those two decades who crashed and burned, most of the people interviewed here are now at the crest of their lives and are winning.

The generational focus provides a cultural history as well. The interviews and their introductions give readers a basic understanding of addiction, its process and it’s consequences. They also inspire, as the celebrities humbly reveal how human and vulnerable they are by disclosing information about the depths of their despair and the joys of their recovery.

Fascinating stories abound in this wonderful collective memoir. Did you know, for instance, that rocker Grace Slick once tried to give former President Richard Nixon LSD while attending a formal tea at the White House? Or that baseball legend Dock Ellis once pitched a no-hitter for the Pittsburgh Pirates while under the influence of acid. Funny stories, indeed, but he also shares that Chuck Negron, lead singer in Three Dog Night, arguably the most popular recording group of the early seventies, lost everything because of his drug addiction and ended up living in a cardboard refrigerator box on LA’s Skid Row. These are just a sampling of some of compelling stories of addiction and recovery in THE HARDER THEY FALL.

Buy The Harder They Fall 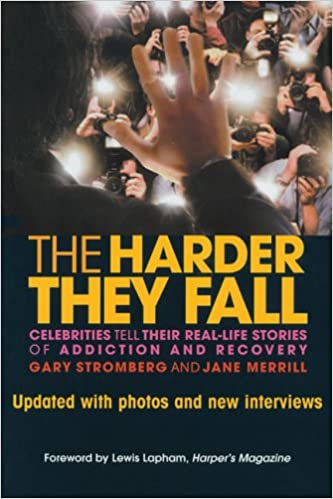